Home > History of the World > A Grand Re-Union 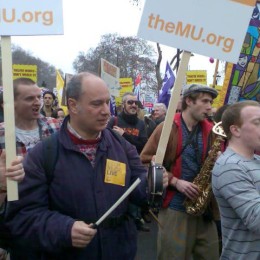 ‘I went down to the demonstration…’ (March for the Alternative, London, 26th March) but instead of abuse I was delighted to find myself in the company of Tony Haynes and members of the very wonderful  Grand Union Orchestra.   Imagine busking in the street with such luminaries as Claude Deppa, Chris Biscoe, Byron Wallen and Louise Elliott and you will appreciate my excitement!

If you haven’t had the pleasure, Grand Union is a magnificent assemblage of jazz and world musicians – literally from all over the globe.  Under the creative leadership of Tony Haynes the Orchestra performs concerts and music theatre of astonishing cross-cultural richness and ingenuity.  Over 30 years Tony has investigated and engaged with many cultural traditions, producing original works on themes as diverse as the enslavement of African people in the New World, to the history of the Silk Road.  The Orchestra has also delivered ambitious and memorable participative community and education projects that draw directly on the musical practice of the Orchestra and its musicians.

Tony and I first met circa 1984 when as Director of an Arts Centre in Oxford I was keen to encourage music  improvisation among schools in the area.  I remember going to see the Orchestra performing in a Sports Hall and being blown away by the diversity, audacity and vitality of the music.  I was not alone, as the hundreds of students responded alike.

Over the next few years we worked together extensively in Oxfordshire and Warwickshire schools, youth organisations and with local musicians including jazz and rock, Bhangra and orchestral players.  The finale ‘If Music Could’ involved 200 young people and adults and subsequently went on to be developed in two other Grand Union residencies.

I have learned a massive amount from Tony and the other musicians about how new music can be inclusive so as to reflect and respect different cultural and musical traditions.  They also enact the sheer power of music to engage people in participation who may not have had the opportunity to undergo the  formalities of conventional training.

And that brings us back to the march and the reasons for being there.  Masses of arts educational activity is going to disappear in the coming months and years as a result of current government policies, including outreach projects by organisations like Grand Union.  In the scale of all the hardships that people will experience this may not be the greatest.  However anyone who has seen the transforming power of participation in the arts knows that something amazing is going to be denied to thousands of people of all ages through no fault of their own.