Many thanks for being a part of our wonderful 2021 weekend festival and for getting the residents of Kenilworth dancing in the square!

Very grateful to you all who performed with me last Sunday and especially to Tony Kofi for being an amazing duo partner! Feel really great playing with you and it was fun working with the wonderful musicians from Interplay! This is the way forward – sharing, collaborating and making Live Jazz more accessible for everyone. Thank you Matthew for the review!

Concert audience comments
“…blooming amazing. Superb”
“Thank you so much for such a great night with Alina, Tony and, of course, Interplay!  Fascinating to hear a harp playing jazz.”
“Fantastic night.  Huge thanks.”
Chesterfield Jazz Fan

“A very tight band, great technical skills and a real joy in communicating their love of the music. Interplay were really cooking!” – Martin S, Chesterfield, March 2021

What an amazing gig last Saturday! I was blown away by every one of you and have never heard Interplay play better.

Hugely inspiring! Thanks for a truly great night.

Adrian – I just had to write to say how much my friend and I enjoyed the gig in Jephson Gardens last Saturday – a super vibe.  I think it’s a great venue for you and the boys.  I’m a regular at Ronnie Scotts in London but it so nice to have Jazz here locally.

Please play more Buena Vista Social Club music.  All of it was great but that is a special fave.

Please pass on my congrats to everyone involved.

A great success for #Jazz Day!  I really enjoyed it.

Cheers and thanks to Matthew for the hospitality

Fantastic gig…. Had so much fun!

Ace jamming with the band, true masters and gents! Really made me feel part of the team, what a blast, especially trading solos with the master himself!! Now that doesn’t happen every day!

Thanks Adrian, and congrats on a blinder!

Congratulations on and thanks for a brilliant jazz gig at the Restaurant in the Park.

The music and musicians were amazing. John Etheridge was, as expected, superb.

The venue worked very well, good sound and a good acoustic, visibility, lighting, bar and seating. I tried two or three different positions in the seating area and all were good with even the furthest away being fine.

I can only speculate on how much work goes into getting it together.

The outcome was memorably great.

International Jazz Day was marked in great style in Leamington with the appearance of this “exciting improvising group”. Interplay were formed by bassist/composer Adrian Litvinoff in 2007. Influenced by jazz and the musical tastes of the band members, ranging from salsa to Latin, blues to Indian music, hi-life to ska and Celtic fusion, this is truly exciting music embracing global influences.

At the Pump Rooms the excitement was increased further with the addition of South African trumpet virtuoso Claude Deppa. This event had been much anticipated and an audience of over 140 people were not disappointed. Deppa’s energy and enthusiasm gave the band added fire power.

There is always plenty of variety in an Interplay performance. The band let the good times roll on numbers such as ‘No Trouble’ and brought the tempo down for the more contemplative ‘Live Our Life’. It is always a delight to see drummer Dave Balen sitting cross-legged, amongst an array of exotic percussion and it was especially good to hear the familiar sound of ‘Weightless’ cast in a different form with Deppa dueting with Balan on tabla.

Several of the tunes were being played for the first time and this served only to increase the level of excitement still further. Adrian Litvinoff told me that Deppa was keen to immerse himself in the band’s repertoire of original compositions, all of which had been re- arranged especially for this concert.

Along with Alan Wakeman on saxes and flute, Neil Hunter on keyboards and Richard Baker on trombone, Balen and Litvinoff form a wonderfully cohesive unit and, I have to say, five of the nicest people one could wish to meet.

The first part of the evening was given over to the music of Three Way Split with Ian Hill on saxophone, Wayne Matthews on bass and David Anderson at the drums and the trio joined Interplay for ‘The Shuffle’, the highlight of the evening and a rousing finale.

This is just to say that I enjoyed Friday’s session very much… We got a lot of very good feedback about the band.

…more than just a ‘regional” outfit’ 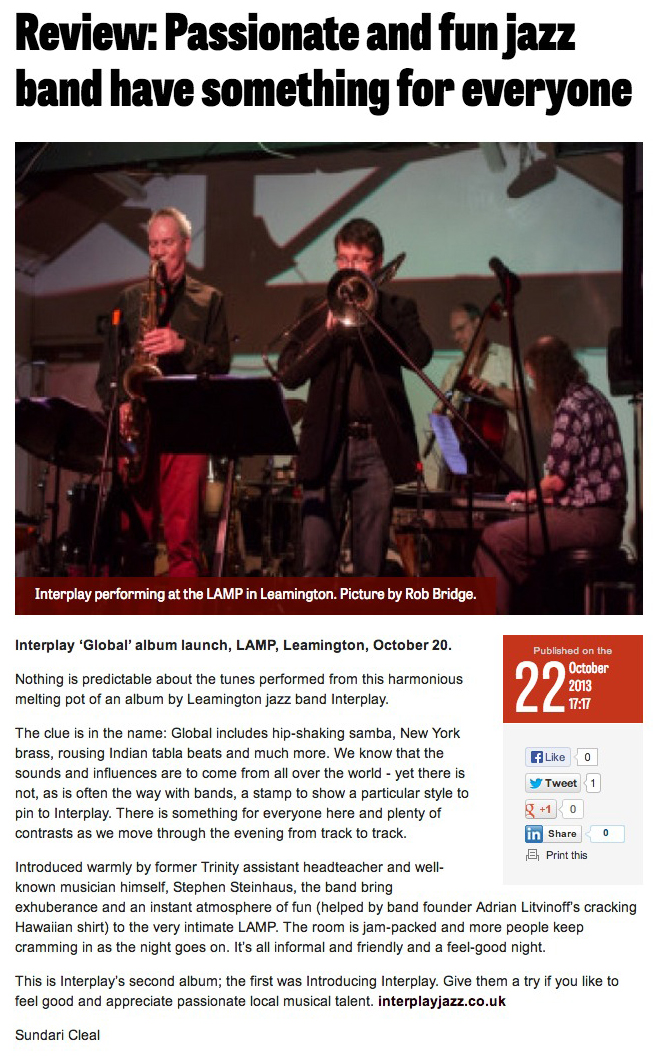 Hello Adrian!  Your gig  last Thursday was a breath of fresh air. My wife and I travel all over the place for our jazz and in truth, when some bands include originals in their play lists, all too often the writing is  lacking in inspiration. However in the case of Interplay that is clearly not the case. Also it is good to hear a band which doesn’t have to include a vocalist. Furthermore, the audience participation wasn’t in any sense self conscious. Instead it achieved the challenge of reaching out to the audience, which not all bands are capable of doing. Keep up the good work and thank you for a satisfying evening of colourful and engaging jazz!

Another great evening of jazz at the Chesterfield Jazz Club.  Interplay were GREAT!, melodious and funky at the same time. And the audience participation was fun. So to all those who didn’t venture out in the cold February air you missed a smashing night. I hope you’ll be able to get them back again soon.

I like your compositions, nice variations in rhythm, tempo, dynamics etc.   I particularly like Neil on keyboard, very inventive.   Lovely evening

Fans of Interplay are in despair over the long wait until the next gig! Great jazz night, Adrian, you guys were on top form

We have had so many compliments about the “fantastic Jazz band” at our wedding. You were such a hit. Thank you so much!

The best performance at Sheffield Jazz@Lescar for as long as I can remember; tight, varied, enthusiastic and thoroughly enjoyable. I even bought the CD! Please come back again soon

Litvinoff leads the group with strong double bass. Adrian wrote all but two of the tunes on this debut CD, and they are all melodious and memorable….the arrangements are warm and imaginative.

There is a wide range of styles – from the funkiness of Island via the dreamy buoyancy of Rising on Thermals to the African influence in The Shuffle.

And there are some good solos, especially from the very talented saxophonist Alan Wakeman. Alan supplies some smart soprano sax on Hang Around and he states the theme of Rising on Thermals with feeling. But then he has played for Graham Collier, John Dankworth and Don Rendell. Trombonist Richard Baker also makes some worthwhile contributions, having graduated from classical music to jazz. The rhythm section fulfils its role confidently, with agreeable solos from all three members.

Thank you for coping with stage and acoustics. Promoter was very pleased with performance and said that the quality was excellent and that it gave the venue the opportunity to develop different audiences.