Interplay saxophonist Alan Wakeman recently reached a milestone birthday this year. Matthew D. Wright has written about his considerable track record and his continuing contribution to jazz, and this appraisal appeared recently in Jazzwise Magazine. 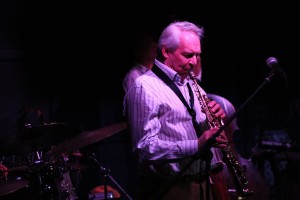 Swifts are back – cue the music! 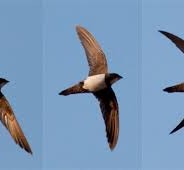 May is eagerly awaited as the true start of summer – at least in this house – because it bring the return of the Swifts. Almost the last summer migrant birds to arrive, they animate the sky over towns and cities as well as over open country. The sight of them wheeling and darting high in the air is truly invigorating, while their screams as they swoop low around the roof-tops are an essential part of summer’s sound-scape. It was on May 5th that I saw my first swift this year, and now they are back in numbers.

The more I understand about these birds the more amazing they appear. For example after fledging and leaving the nest a young swift may remain airborne for as long as three years before touching down to begin building a nest of its own! Feeding, drinking, sleeping, mating, all are done on the wing. ‘Sleeping’ is in fact hardly the correct term – somehow they are able to continue in flight for hours in a semi-comatose state, often at very high altitude, and well out of the range of predators.

We live in a very old house, and have been thrilled to see swifts diving straight through a small opening into our roof-space on several occasions. We don’t know if they have bred there – there is no way for us to get up so high, let alone see inside. But we are happy to have them there, especially given that nesting sites have become much more scarce as construction methods have changed. Fortunately some house builders are beginning to recognise the importance of providing bird-friendly access to nest space in new developments, so hopefully this decline can be reversed.

It is great to see the swifts back again, and to feel the year turning towards its summer peak. I feel a tune coming on!

If you want to hear the full track why not head over to Spotify and type in Interplay Global? You’ll be able to savour our whole album! 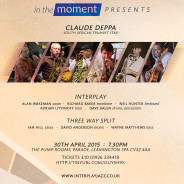 I’ve been talking to jazz musicians and promoters in the Midlands a lot recently in the build up to International Jazz Day 2015 and our concert with Claude Deppa, Interplay and Three Way Split on April 30th at the Pump Rooms, Leamington. I’m struck by how few of them have heard of IJD, let alone are preparing to play any part in it.

This could be a case of good old British scepticism about anyone who sets out to blow their own trumpet. If so I think this is misplaced, and risks letting an important opportunity go unanswered.

As I see it IJD is a fantastic development for jazz, a music that has been marginalised and neglected for decades. It allows us to present the case for jazz in a totally new light – with the full public endorsement of UNESCO,  a global organisation committed to the advancement of culture and education worldwide. Let’s look at this in a few headlines:

All this suggests to me that for at least one day a year the jazz world is setting the cultural agenda, not fighting for a place on it, and I love it.

We know that jazz in the UK is under-exposed, under-resourced and poorly understood by many people and institutions. Despite that it survives, and some might say flourishes, as a music of persistence, of resistance against the homogenisation of culture, and the assertion of every individual’s right to be heard in their own way.

Many people find they like jazz more than they thought, as and when they come into contact with it. And this is the point about IJD for me. It is our opportunity to claim the attention of a much wider public, present a united front, experience some solidarity instead of market competition, and persuade thousands of people that this wonderful way of making music really has something to offer them, as audiences and as performers. 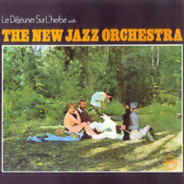 Jazz musicians learn and develop by listening as well as by playing. It doesn’t matter which starts first in my opinion, but I know that going to hear live jazz and exploring it on record and through radio have been vital aspects in my own musical growth. It has both excited me about the possibilities for my own music and taught me invaluable lessons of approach and execution. There may be exceptions – maybe – who have pursued a solitary path with originality and inventiveness. Even so they probably need other musicians to play with in order to fulfil their creative impulses, and in jazz ‘playing with’ has to mean ‘listening to’ in my book.

What brings this to mind? I was recently the guest on Alan Musson’s excellent show ‘Jazz Kaleidoscope’ (The Bridge Radio) which afforded me the opportunity to choose almost two hours of music for the show. As you would expect, I spent a considerable time trawling through my CDs to put my playlist together. With so much to choose from I had to deal sternly with myself to arrive at a list that truly justified its selection.

So what criteria carried the day? In the end there were two themes: one was to do with people crossing boundaries and playing in someone else’s yard. It’s more than ‘crossover’, which for me occasionally suggests cleverness without a further musical need or justification, like riding two bicycles at once. So for example ‘Hands’, Dave Holland’s collaboration with Spanish guitarist and head of Flamenco dynasty Pepe Habichuela; Dave confides in the liner notes that it took him a couple of years to work out what he should really play! Or Roland Kirk’s treatment of ‘Say A Little Prayer’, which expands a brilliant popular song into an anthem for Martin Luther King and all the tribulations of the African-American people, regretfully as relevant today as it was in the 1960s.

The other strand was about me acknowledging those who inspired me, and whose creativity and artistry helped to illuminate my path as I was finding my way. This rather large number of artists comprises many American but also many British musicians. Thinking again about Jack Bruce, (see my post ‘Jack Bruce – Recollections and Reflections’) I was thrilled to rediscover on Gilles Peterson’s ‘Impressed Vol. 1’ the marvellous ‘Dejeuner Sur L’Herbe’ by the New Jazz Orchestra. Not only is Jack Bruce on double bass, helping to hold Neil Ardley’s superb composition together with flair and authority, but there’s a gorgeous, lyrical flugelhorn passage from Ian Carr and an astonishing two-horn entry from Dick Heckstall-Smith that still knocks me breathless nearly 50 years after I first heard it. In fact this was my top track for the programme – the one I definitely had to play above all the rest.

That whole era of British Jazz was so fertile, open and dynamic, and it was happening just as I was beginning to explore my own musical identity. I am really grateful to have experienced it at the time, and also to GP for putting together a fitting reminder of so much that should not be forgotten.

Now I’m over at Stourbridge (home of The Bridge Radio), and something amazing happens. Alan and I are talking about the tracks I’ve brought along (the full playlist is below), and the time is flying by. We’re well into the second hour when the studio phone goes and he picks up.  ‘Hello stranger’ he says, aware that Don Ellis’s ‘Turkish Bath’ has only a couple of minutes to run.

‘That was another bass player, Ron Mathewson,’ he tells me afterwards, and I am stunned. Ron Mathewson – my absolute top British double bassist of all time! I first saw Ron in about 1965 at Hornsey Town Hall with Ronnie Scott. They played ‘A Taste of Honey’ and the band left Ron the stage for the bass solo, which was immense and seemed to flow effortlessly for about 10 minutes! Later I got to know Ron through the Barry Jazz Summer Schools, where he was unfailingly generous in encouraging all the student bass players, and we hung out once or twice afterwards. I still clean my bass strings the way he taught me. His withdrawal from the scene left a huge musical void, in my view.

Anyway, Alan put out the word over the air and Ron, a regular listener to the show as it turns out, phoned in again to talk to me. I was stoked! We had a brief but warm chat – I don’t know who of us was the more surprised – but it was fantastic to be talking to him again. I certainly hope it won’t be the last time.

Thanks very much again to Alan Musson and Jazz Kaleidoscope for allowing me so much time to play some of my favourite tracks and re-connect with so much of my musical past.

1.     King Curtis – ‘Dah Du Dah’ from the album ‘The New Scene of King Curtis’ with Nat Adderley and Wynton Kelly

3.    Herbie Hancock – ‘Edith and the King Pin’ from the album ‘River – The Joni Letters’ with Tina Turner and Wayne Shorter

5.    Tim Ries – ‘Paint it Black’ from the album ‘The Rolling Stones Project’ with Brian Blade, Bill Charlap and John Patitucci

7.    Kurt Elling – ‘A New Body and Soul’ from the album ‘Night Moves’ with Laurence Hobgood and Christian McBride

8.    Dave Holland – ‘El Ritmo Me Lleva’ from the album ‘Hands’ with Pepe Habichuela

11.   Roland Kirk – ‘I Say A Little Prayer’ from the album ‘Volunteered Slavery’ with Ron Burton and Joe Texidor

Why I Too Love Libraries

This week Radio 6 Music is celebrating libraries, while indie band Everything Everything is hosting an arts festival in Manchester’s newly-refurbished Central Library.

So it seems the perfect time to say my piece about libraries and the debt I owe them.

At primary school aged 9 or 10 we were walked down the hill some 30 strong every week to the branch library in Keats Grove, where a kindly lady made us welcome and talked about the books and how they were arranged. Coming from a bookish family I was already a reader, and so the thing that really excited me was the catalogue.

It dominated the middle of the room; tier upon tier of wooden cabinets containing draw after draw of index cards, END_OF_DOCUMENT_TOKEN_TO_BE_REPLACED

Posted by Adrian Litvinoff on November 4, 2014 in blog | 3 comments 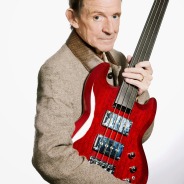 Many people were saddened by the recent death of Jack Bruce.  Bassists in particular have reason to acknowledge his influence and his passing. I certainly do.

As a young man and beginning bassist in London in the 1960s I had opportunities to hear many fine players, both of double bass and electric bass. Ron Mathewson, Chris Laurence, Dave Green, Danny Thompson, Jeff Clyne and Harry Miller were among my favourite jazzers. They were readily ‘available’ at club gigs around London. Listening to Jazz Club on the radio I grew to identify some players by their sound alone, because in those days bass amplification had yet to arrive. (When it did, for a while everyone sounded like ‘Mr. Polytone’ or ‘Mr. Underwood’, or whoever made the next pick-up.)  And this was without all the great American players I was also into. END_OF_DOCUMENT_TOKEN_TO_BE_REPLACED