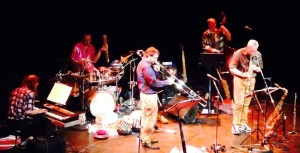 Ian Mann enjoys the combination of jazz and global sounds from these two Midlands based groups.

The studio theatre at Warwick Arts Centre was pretty much sold out with supporters of both bands helping to turn this into a popular, good natured event that brought out the best in both groups. I was there at the request of Interplay’s bassist and leader Adrian Litvinoff so I’ll take a look at the music of his group first, even though they performed second – effectively headlining.

Interplay consists of five highly experienced musicians who now live in various parts of the Midlands. Litvinoff, based in the Whitnash area of nearby Leamington Spa leads the band from the bass and is its composer in residence with other items in the group’s repertoire coming from the pens of writers such as Pat Metheny, Abdullah Ibrahim, Herbie Hancock and McCoy Tyner.

Litvinoff is joined by the vastly experienced Alan Wakeman on reeds plus Richard Baker on trombone, Neil Hunter on keyboards and Dave Balen on drums and percussion. Extensive biographies for each can be found on the band’s highly informative new website https://interplayjazz.co.uk

Formed in 2007 Interplay have released two full length albums on Silvery Records, “Introducing” (2010), which features the guest vocals of singer Andra Sparks, and the all instrumental “Global” (2013) which formed the basis of tonight’s set. However Interplay began where Sonrisa had left off with the lively Latin sounds of “El Cuarto de Tula”, originally heard on the celebrated “Buena Vista Social Club” album. Interplay’s all instrumental arrangement featured the Cuban inspired electric piano stylings of Neil Hunter and the Latin components of Dave Balen’s impressive and elaborate percussion set up.

The Pat Metheny tune “Hermitage” originally appeared on the composer’s 1979 solo guitar album “New Chautauqua”. Litvinoff cites the piece as a long time favourite of the band and speaks of the way “it moves between introspection and affirmation”. Interplay’s arrangement began with Hunter at his Cheetah keyboard, this time adopting an acoustic piano sound and looking like a dead ringer for Lyle Mays. Metheny’s melody is well suited to the timbres of horn players and the warm, well rounded tones of both Wakeman on tenor and Baker on trombone served the tune well, offset by Litvinoff’s nimble work at the bass and Hunter’s cushioning string synth sounds.

The Litvinoff original “Spanish Step” saw Wakeman switching to incisive soprano sax for a tune that presented a classic hard bop sound with a Latin tinge, with solos from Baker, Wakeman and Hunter, the keyboard player again deploying an acoustic piano sound. We also heard from Litvinoff, the leader stepping out of the shadows to reveal himself as an inventive and melodic double bass soloist.

The ballad “Slow Flame” is a piece that Litvinoff has had in his locker since the 1980s but which recently resurfaced on “Global”. Introduced by Hunter’s keyboards and featuring Balen’s delicately brushed drums and intricately detailed small percussion this was an elegant and melodic piece that formed the basis for a sumptuous blend of horns plus solos from Baker on trombone and Wakeman on tenor. Litvinoff’s own solo was both lyrical and melodic, subtly underscored by Balen’s delicately brushed drums and Hunter’s string synth backwash.

Balen stepped out from behind the kit for the performance of Abdullah Ibrahim’s “Imam”, one of the stand out cuts from the “Global” album. Here he played an Egyptian hand drum giving, as Litvoinoff remarked, “a South African tune a North African flavour”. This proved to be highly effective, Balen’s playing impressed in itself and also provided superb support for an excellent Wakeman solo on keening soprano that evoked both African and Asian influences. With Litvinoff switching on electric bass and other band members wielding various items of percussion this was both musically and visually arresting. Baker eventually took over on vocalised, plunger muted trombone as he threw more exotic ingredients into an already rich stew. But in the end this was Balen’s piece as he concluded proceedings with an exuberant display, producing an impressive array of sounds and rhythms from his superficially simple Egyptian drum.

In keeping with the spirit of the “Global” album Balen moved to the Indian tabla for “Weightless”, Litvinoff’s composition inspired by the raga music of the sub continent. This produced further inspired dialogue between Balen on tabla and Wakeman, again on soprano, this time adopting a more obviously “Indian” sound. Wakeman is a real asset to the band, an astonishingly experienced musician who has worked extensively with Mike Westbrook and once had a stint with Soft Machine. And yes, he is the cousin of Grumpy Old Rick before anybody asks.

Next up was Herbie Hancock’s “Chameleon” with Litvinoff speaking of “changing its colour” and “taking the chameleon for a walk”. Interplay’s version embraced Herbie’s funk grooves with Balen back behind the kit, Litvinoff on electric bass and Hunter deploying a classic Rhodes sound before the group added in some reggae rhythms. Hunter’s keyboards provided a linking passage as Balen abandoned the drums and took up the tabla once more as the chameleon wandered well off the beaten track. Finally it was back to the kit as the reggae groove kicked in once more. The well travelled “Chameleon” was enthusiastically received by the Coventry crowd.

Litvinoff’s “The River At Sundown” represented an excellent piece of descriptive writing , its impressionistic, folk like melodies embellished by the solos of Wakeman on soprano, Baker on well rounded trombone and Hunter on acoustic piano.

Many of Litvinoff’s pieces seem to draw their inspiration from the natural world and the optimistic, sunny sounds of “Swift Return” closed this excellent set. The title celebrates the arrival of swifts on British shores and the start of summer. The tune is a gently swinging samba and featured Wakeman on flute alongside Hunter’s gently trilling electric piano sound and Baker on more earthy trombone. It was perhaps appropriate that the last solo of the night should go to the composer and band leader on double bass.

I enjoyed this performance from a band with a distinctive group sound and philosophy and welcomed the various global aspects that they brought to their core jazz sound. The Latin, African and Indian elements all sounded wholly natural and unforced, and Litvinoff’s writing stood up well against the outside material. The standard of musicianship was uniformly high with Wakeman arguably the star soloist, Hunter impressing with his versatility and Balen adding a whole new dimension to the sound of the core jazz quintet. I treated myself to a copy of “Global” and can confirm that it’s a consistently interesting and enjoyable listening experience.

Litvinoff is obviously a significant composing talent and in this well seasoned band he clearly has the musicians to do his ideas justice. “Global” is an impressive piece of work and on tonight’s evidence there’s still plenty of mileage left in Interplay with the prospect of exciting new music to come. There is the potential here for them to become more than just a “regional” outfit.

Tonight proved to be something of a triumph for both bands. I’m sure both were delighted with their evening’s work. My thanks to Adrian Litvinoff for inviting me along to share the experience.