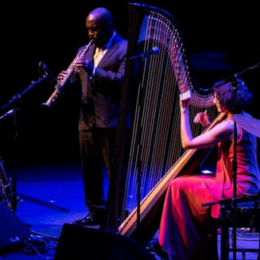 We are very excited to confirm not one but two guest artists for IJD 2019! Alina Bzhezhinska, the acclaimed harpist, is coming with the marvellous saxophonist Tony Kofi. Their recent album ‘Inspiration’ has been a fantastic success as a tribute to Alice and John Coltrane  and a showcase for Alina’s unique sound and style on the harp.

Now based in London, Ukrainian Alina Bzhezhinska is an internationally renowned, exciting and accomplished harpist. She has performed with leading classical and jazz musicians and her critically acclaimed Quartet, with saxophonist Tony Kofi, led the 80th Birthday celebrations for Alice Coltrane around the UK in 2017. Their appearance at the EFG London Jazz Festival in a special triple bill featuring Denys Baptiste and Pharoah Sanders – ‘A Concert for Alice and John’ – was nominated for Best Live Experience of the Year at the 2018 Jazz FM Awards.

The Quartet’s album, Inspiration, was released in June 2018. “I set myself on a mission to tell Alice and John Coltrane’s story in my own words, through my own interpretation of their music and my compositions,” explains Alina.

Having ‘cut his teeth’ in the “Jazz Warriors” of the early 90’s, award-winning saxophonist Tony Kofi is well established on the international jazz scene. He has worked with many leading bands and artists including The World Saxophone Quartet, Donald Byrd, Abdullah Ibrahim, The David Murray Big Band, Ornette Coleman and Jazz Jamaica. His fluent and fiery hard-bop playing is constantly in demand and his recent projects include A Portait of Cannonball Adderley and Tony Kofi & The Organisation.

This combination will give Interplay some challenges, as well as opportunities to explore the sound qualities of the harp. At the same time the three horn front line will create a richer ensemble and bring some added excitement. The tunes will be by Alina and other composers as well as from Adrian’s repertoire.

Alina will give a short informal Q & A session at 6.30pm prior to the concert. Admission to the talk is free.

We are also trying a different venue this time. Victoria House is a period mansion close to the centre of Leamington. It is easily reached, fully accessible and with a friendly atmosphere.

Details of the gig including ticket availability are here.