International Jazz Day 2018 sees trombone star Annie Whitehead joining Interplay at The Restaurant in The Park for an exciting and groove-filled evening.

Annie’s huge CV ranges from working with top British and international jazz musicians (Carla Bley, McCoy Tyner, Abdullah Ibrahim, Andy Shepherd, Chris McGregor, Gary Crosby) to leading rock and multi-genre artists such as Joan Armatrading, Elvis Costello and Robert Wyatt. Stylistically her playing encompasses everything from straight-ahead and progressive jazz to dance rhythms from Africa, the Caribbean and the US.

Annie will play her own compositions and arrangements as well as Interplay material. In pursuit of the spirit of International Jazz Day, African tunes will feature in the programme.

In addition Letitia George, Coventry’s talented and exciting singer, will be on hand. After wowing crowds at In The Moment’s two Blues Revues last year, Letitia is making her first foray into jazz supported by Interplay and Annie Whitehead! 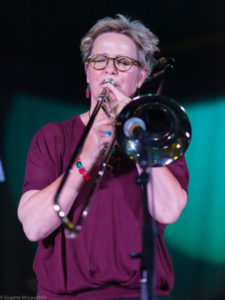 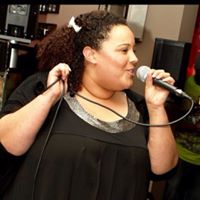 Annie was born in Oldham, Lancashire, the heart of brass band country. She learnt trombone at school and by the age of fourteen was already busy playing with brass bands, local dance groups and the Manchester Youth Jazz Orchestra. At sixteen, she started her professional career with Ivy Benson’s All Girl Orchestra. Since then she has brought her distinctive sound to a wide range of projects, exploring many different musical styles.

Session and pop credits include Joan Armatrading, Chris Rea, Bill Wyman, Maxi Priest, Jerry Dammers, Elvis Costello, Eddi Reader and Paul Weller. With the horn section The Kick Horns, she has done session work with Rufus Wainwright, The Spice Girls, Blur, Tom Jones, Boyzone, The Beautiful South, Jamiroquai, Dr John and Eric Clapton and many others. She recorded and toured extensively with Fun Boy Three, Joe Jackson, The Charlie Watts Big Band, Jah Wobble and the Invaders of the Heart, and was a founder member of Working Week.

Annie has led many workshops on improvisation and composition for all ages and musical abilities, working in schools with children as young as seven, as well as teaching on the Jazz faculties at the Royal Academy of Music and the Centre for Young Musicians. She currently runs a regular World Music & Jazz Workshop band in London.

In 1988, Annie joined the Penguin Cafe Orchestra with which she toured worldwide and appeared on three albums: ‘Broadcasting from Home’, ‘Union Cafe’ and ‘Concert Program’. It was here that she met her partner and musical collaborator Jennifer Maidman. Their first of their many projects together was the free-funk ensemble ‘Rude’, which released a CD ‘This is Rude’ on the Resurgence label and continues to play live throughout the UK and Europe.

Together with Robert Wyatt, she arranged a number of his songs for the ‘Live and Direct Festival’ in Newark. The band, “Soupsongs” featured Julie Tippetts on vocals, and also included Didier Malherbe, Harry Beckett and Phil Manzanera. They went on to play a concert at the Royal Festival Hall for the London Jazz Festival which was broadcast by the BBC. Shortly after, they released a live CD ‘Soupsongs – the Music of Robert Wyatt’ and have since performed in the UK and Europe, and more recently, ‘In Conversation’ with Gavin Essler and Robert at the University of Kent. They also performed with Robert in a film about his life, “Free Will & Testament – The Robert Wyatt Story” by documentary maker Mark Kidel, which was broadcast on BBC2.

In 2001 she was commissioned by The Bath International Music Festival to write new music with English Concertina player, Alistair Anderson. Their piece was premiered that year at the Festival and they have since recorded a cd ‘Airplay’ as well as touring England and Scotland for the Contemporary Music Network with their group ‘Northern Lights’.

Typically, she’s recently been involved in an eclectic mix of projects, recording with Trevor Warren’s Dissassembler, (featuring Mark Lockheart and Winston Clifford) and Scottish contemporary composer Bill Wells and German electronics wizard Stefan Sneider of Map Station – a follow up to their previous cd ‘Pick Up Sticks. She also toured with and recorded the album Platform One’ with Belgian band The Wrong Object + Harry Beckett. She continues to play with the Brotherhood of Breath, The Zappatistas with John Etheridge, British blues legend Carol Grimes, Comicoperando with Dagmar Krause and Karen Mantler, and The William Blake Klezmatrics with beat-poet and national treasure, Michael Horowitz, and, along with her compadres from the Penguin Café Orchestra, ‘The Orchestra That Fell to Earth’.

With her own bands she has toured the UK, Europe, India and the Far East and appeared at most major international jazz festivals. Her first album as leader was ‘Mix Up’ released in 1984. In 1996 she released ‘Naked’, followed in 1999 by ‘Home’. Then came ‘The Gathering’, featuring her current live band: Jennifer Maidman, producer and guitarist – Steve Lodder on keyboards, Dudley Phillips on bass, and Liam Genockey on drums. They continue to tour throughout the UK playing in jazz clubs and festivals including the London, Glasgow and Brecon Jazz festivals, and have featured many times on BBC Radio 3, broadcasting from the Blackheath Concert Halls and the London Jazz Festival.

Most recently she has played on Jennifer Maidman’s debut album Dreamland, recorded in Woodstock NY, which also features David Torn on guitar and drummer Jerry Marotta. Annie and Jennifer are currently working together on their various projects as well as promoting the album in the US and the UK.