Posted by Adrian Litvinoff in | 0 comments

International Jazz Day 2017 will see the great British jazz singer Norma Winstone (MBE) heading to Leamington to appear with Interplay. Norma is an internationally acclaimed musician with an amazing career spanning five decades. She first came to general notice appearing at Ronnie Scott’s with Roland Kirk, in the late 1960s. Since than she has built a unique reputation because of her original vocal delivery, as an interpreter of song, and as a lyricist.

Awards and Acclaim for Norma Winstone

Norma’s work with pianist John Taylor and trumpeter Kenny Wheeler was particularly ground-breaking and celebrated, resulting in some classic recordings on the ECM label. Since then she has worked with many different artists in Britain and abroad, winning awards and plaudits as she goes. Most recently she was voted the Best Vocalist in the 2015 Parliamentary Jazz Awards, and in the same year received the Gold Badge of Merit from the British Academy of Songwriters, Composers and Authors. In 2007 she was awarded an MBE for services to British Jazz.

It is therefore really exciting that Norma will be on stage with Interplay, presenting songs by Adrian Litvinoff as well as some well-chosen jazz standards and instrumentals.

The event, which is an In The Moment presentation, will take place in The Restaurant In The Park, Jephson Gardens. Please use the entrance in Newbold Terrace (opposite Newbold Street and the Royal Spa Centre). Map 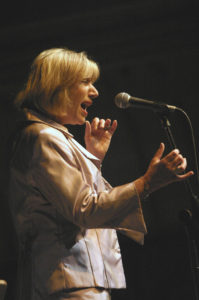