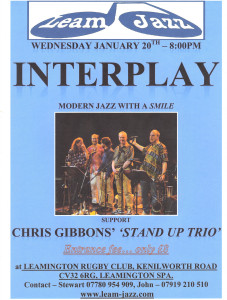 Back in the Leamington home of Rugby after an absence of almost four years. Interplay appears courtesy of Leam Jazz, now in its sixth year at Leamington Rugby Football Club. Congratulations to John, Stewart and Rob for keeping it going and for putting on some fine music. We’re glad to be back.

Also on the bill – ace guitarist Chris Gibbons with his all new Stand Up Trio!